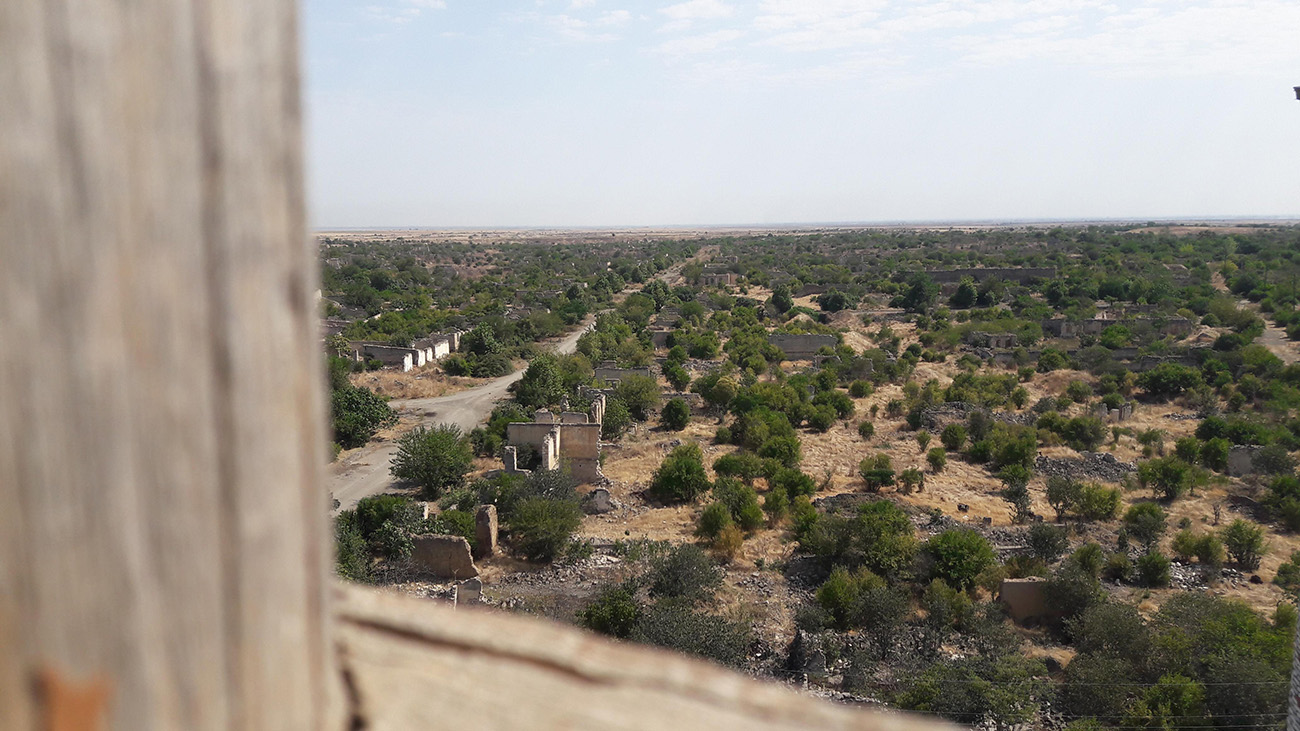 23 Aug AGDAM: THE CITY THAT DOES NOT EXIST

Agdam is a place that does not exist. Better, a place that no longer exists because it was erased to the ground. A road-end where you can only walk in silence, as when you walk through a graveyard. A ghost town. A dream. No, not a dream. A nightmare, the fruit of Stalin’s poisoned whims. Agdam is a Turkish name: Ag means “white” and Dam means “house”. Agdam, in Azerbaijani, means Casablanca. But in the name ends any resemblance to the cosmopolitan and modern Casablanca that lives at the edge of the Atlantic. Because in Agdam there is nothing alive: ruins, broken streets, piles of brick and white stone. The main mosque is the only building left standing of a city of 60,000 inhabitants. And after 25 years the main mosque also threatens ruin. There is only one road leading to Agdam. From Goris, south of Armenia, the road, carefully paved thanks to the generous donations of Kirk Kerkorian, snakes through green mountains and beech forests. Since 1993 that border does not exist but on maps. Armenia is left behind and you drive into the Armenian Republic of Nagorno Karabakh, an independent republic recognized just by Armenia, whose army is the Armenian Army and where people feel more Armenian than their Armenian brothers. Just a few kilometers beyond the old border a tiny cabin occupied by several policemen serves as a reminder of the required Visa to visit Karabakh. But the Visa can only be obtained in Stepanakert, the capital. As strange as it may seem to get the visa to visit Nagorno Karabakh, it is necessary to cross half the country to request it in the Office of the Ministry of Foreign Affairs of the capital. As we leave behind villages and mountains the relics of war become more and more visible: burnt armored transports along the road, schools and farms occupied by almost teenagers dressed in military uniform, old URAL trucks that come and go by the road, cemeteries full of heroes, bitterness and memories. As Europe shuddered with the siege of Sarajevo on this border between Europe and Asia the massacres left the Balkan wars with children: decades of intrigue, suspicion and Soviet tyranny, centuries of tribal fighting and revenge. Turks against Armenians, Turks against Turks, Russians against Turks, Reds against Whites, Patriots against Communists, Patriots against Patriots, weapons dealers against and with all…. The legacy of Stalin. When in 1923 the Soviet Nationalist Commissioner, a certain Georgian Josef Stalin, decided that Artsakh would become the Nagorno-Karabakh Oblast (literally, Mountainous Karabakh) and its population, more than 75% Armenians, would become dependent on Azerbaijan, the dictator was amputating Christian Armenia and creating a strange minority within the Turkish and Muslim Azerbaijan. With the first signs of weakness of the Soviet state Armenians and Azerbaijanis were machine-gunned and mercilessly bombarded for the control of the Karabakh hills. With the same fury, ethnic conflicts broke out throughout the former USSR: Tajiks and Uzbeks, Ukrainians and Russians, Moldovans, Chechens, Georgians, Abkhazians, Tatars … With the same ease an AK-47 is armed villages were emptied and columns of refugees bombed. Vodka ran through the Kremlin. The mafias recruited the KGB (or vice versa, who knows) to manage steel factories and gas or oil companies. The old men were without pensions and the Russian officers sold arms and ammunition to the highest bidder in the markets of each city. From the hills that surround Agdam the city is not easy to recognise. The vegetation has begun to take possession of ruins and streets. From far away the neighborhoods and buildings more distant of the center seem ancient Roman or Turkish ruins. An old abandoned city. But as I drive towards what was once the center the streets have bumps capable of swallowing a car and there is not a single building standing. These are concrete and stone constructions, Soviet style. They have not been bombed. No great battle leaves this trail. No walls, no roofs. Nothing is saved. They’ve been blown to the ground. A fully conscious work. Someone took a lot of trouble to leave this immense cemetery as a reminder. The great mosque and some Soviet murals rise a few meters above the immense landfill that is Agdam. A three-storey building serves as an outpost and observation point for Armenian snipers who watch snipers across the front in Azerbaijan. There is only one family living in the city. They have some pigs and a small magazine [shop] in which they sell sweets and tobacco to the soldiers who patrol the front. They ask me about Armenia, Spain, America. They do it with nostalgia. As if they spoke of another world, of another time. No wonder: they live in a place that does not exist.

Sorry, the comment form is closed at this time.