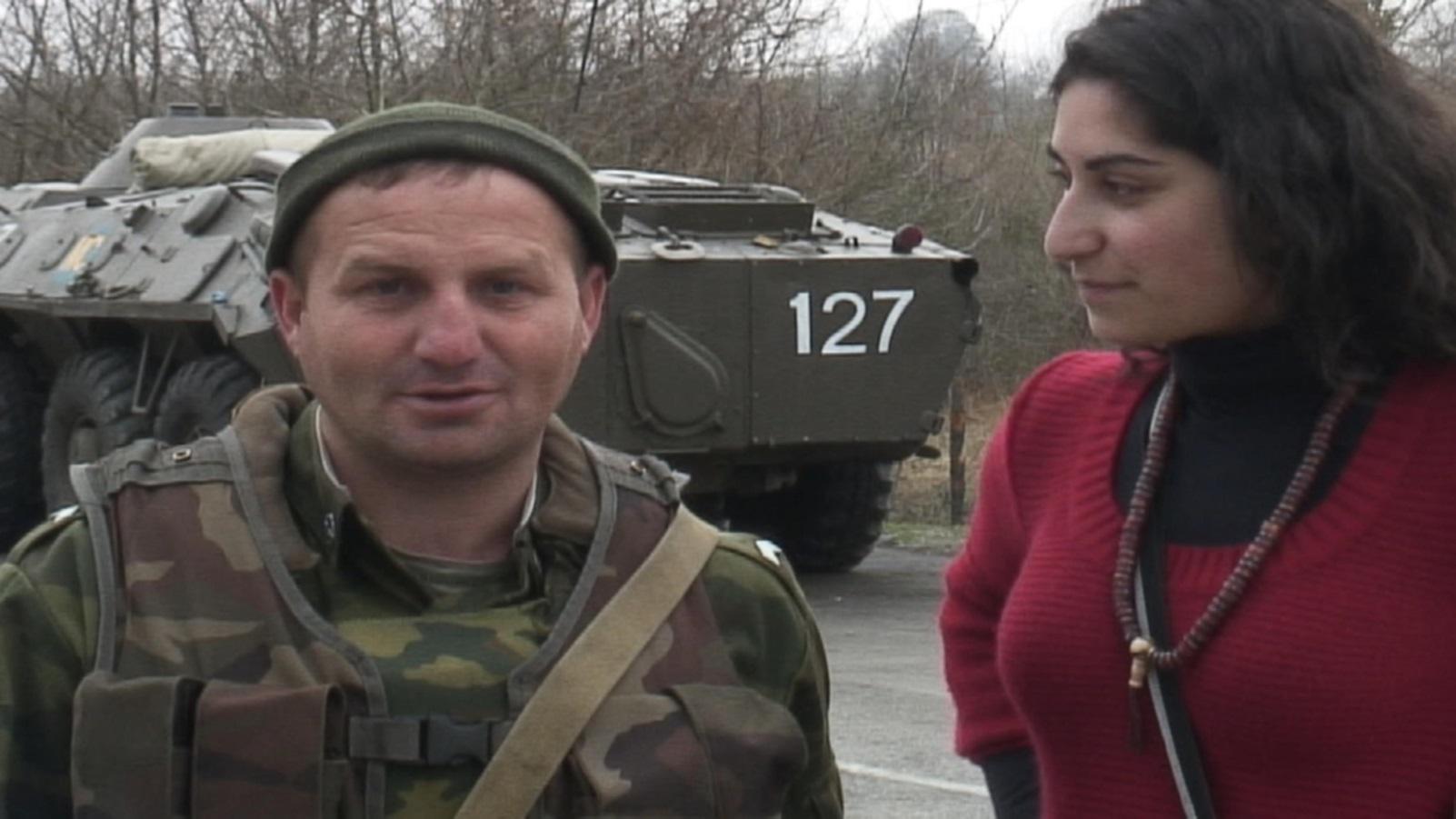 15 Sep SVANETI, THE MOUNTAINS WITHOUT LAW

Kakha waits at the end of the tunnel that connects the courtyard and Rustaveli Streei. Finally we will be just two. New plans at the very last moment and he has not seen many women driving a SUV. When I reach his height he tells me not to worry about the power windows. The truth is that they seem to have a life of their own. He scratches his beard and without waiting for me to join the traffic in Tiflis disappears between women dressed in black and teenagers dressed as MTV rappers. As I walk away from the city the chaos begins to calm down. There are no Vodafone ads or Raikkonen clones led by clones. The Mercedes give way to the Ford Transit and the remains of what were once factories. The old Sukhoi factory extends in silence, in ruins, like a spectrum, during 5 kms. Steelworks, slag, mountains of rubble. Cemeteries of an empire.

40 kms from Poti the road turn towards the North, to Zugdidi. It is 130 km to Mestía by an old Soviet road. In Mestía there is an aerodrome but the valley is narrow and only helicopters and small An-2 bi-planes are able to land. If Americans want to expand the airfield – and they want – all materials will have to climb this route. The road slowly ascends to the edge of cliffs, between steps taken by the guest of the Gulag to the rock: Germans captured in Stalingrad or Prague, people from every corner of the USSR and zeks guilty of the most repugnant crimes. When the Gulag finished, that road returned to oblivion And almost at the gates of Khaisi, I meet a Russian military patrol. They hide among the vegetation, with the road as a field of fire. They sign me to approach. We are tourists. And dummies. It is time to smile and prepare the passports.

– Ispanetc? Armianka? – hee asks when reading my last name in the passport.

“Ruski, Ruski,” he hurries. As if it needed clarification. ВДВ. He turns to the rest of the patrol and shouts that we are Spanish. Ask for Enrique Iglesias. Oh, my God!!!!!. Where I learned Russian, how are the salaries in Spain, if I have a sister, why I drive. The typical police interrogation. Most are from Dagestan and they have a terrible accent. In the metro of Moscow they got beaten but here they are the vanguard of the Mother Russia. We are invited to tea and tea. Barça, Madrid… Football is definitely the best safe-conduct. After a while we return to the car. From the detour in Lukhi the road becomes a quagmire. It is a time of thaw and the cliff to my right gets on my nerves. Puddle, mud, puddle, more clay, another puddle. One deep and the next deeper. In the distance, from curve to curve, I see 2 trucks that also drive to Mestia. A URAL 6×6 tows another smaller one, a GAZ, that has almost as many problems as I do. From the window they signal me to go ahead and greet the horn as I pass them. The climb starts to look like a mud trial. It is a huge effort and every kilometer costs an eternity. The car stalls, reverses, back to try, gas. Once. Twice. Seven times. And suddenly the mud defeats me and I lose control. The car dashes off the cliff. Pisko turns the steering wheel and the car is stamped against the inner slope. Miracle in the last second. The left wheel busted and the car buried to the hood. My legs are shaking and it’s not the weather. But we are alive. Recovering a car buried in a muddy ocean, on a mountain route lost in the Caucasus, in March, dusk and after being about to fall through a ravine does not seem the best of plans. But there is no RAC here. No technical assistance. And the lion of the insurance is not expected. We have the shovel. An hour later we have four wheels, feet frozen and mud up to the ears. An hour later we have company: the two trucks that went up have reached us. We have placed logs and branches under the car to improve traction but I was beginning to think of a good fire and shelter for the night because the Isuzu does not move from the trench. The truck drivers hook us up and the nose begins to turn towards Mestía. We look like a little train: URAL pulls the GAZ and the GAZ the Isuzu. The Isuzu simply slips over the belly.

Vazo’s wife, the GAZ driver, greets us at the door of her house. We are in Letali, 10 kms from Mestia. He grabs me by the shoulders to get me inside to the Печ. What a great invention. When gas, oil, and electricity ran out in Armenia, wood stoves returned. In the towns, in the cities, in the blocks, in the schools. Sputniks and wood stoves: great Soviet achievements. Here the gas never came and the Печ is stove, kitchen and center of the house. The toasts begin. Someone raises the glass of vodka, looks down at the table and begins the Tamada. The first glass is drunk by Father God. The second for the son, Jesus. The third by St. George. Then it is provided by those who are no longer there. Then for those who will come. And for family, friends, fortune … This time the toast corresponds to Vazo:

– Drink, Ani, because today you are alive and you have to celebrate.

We drink. It’s the third bottle of vodka. They speak of the mountain, the winter, the Russians, the Georgians. Timur, the driver of URAL, tells us that when they saw the car they thought they were going to get our bodies out of there. In the morning we have breakfast next to the stove and Vazo accompanies us to Mestía. I do not know if he is curious or he comes as an escort but he knows everyone and everything is very simple. There is no road beyond Mestía until the summer dry tracks. No trace of the Americans. Contact Tbilisi and tell me to come back. And when we get back the car decides to die. All the people go to look under the hood and each one has its theory: battery, generator, diesel fuel pump, injectors, modern cars are not like those before … We are the attraction of the moment. The village mechanic is a young Ukrainian with outstanding issues in his country. If it were UAZ …. At sunset Timur arrives with his URAL. They decide to mount the Isuzu on the truck to go down to Zugdidi. There are more than 20 men pushing. And when they manage to climb it, it starts to snow. We’ll sleep at Timur’s tonight. During the dinner I ask for a colored photograph that hangs next to the clock. Faithful to the old traditions, these men do not hide their dead. It was his sister. She and her father were killed by a man fleeing from Russia, whom he welcomed at home, and who worked by cutting down trees in the forest. Timur was traveling with his truck and when he returned the rest of the town had already buried his father and his sister. The murderer was given Svaneti’s law and buried somewhere else. Timur tells us to wait. It has been snowing all night and it is very cold. We huddled in the cabin of URAL. Soon, between the dawn lights, a family is approaching. They go to the city and have thought no better transport than our Isuzu. They climb through the truck and get into the car over the truck’s box more than two and a half meters above the ground. Amazing. Timur starts and as soon as the URAL enters the first muds under the snow the Isuzu begins to slide towards nothing. We stopped. The car has a wheel out of the box and the four passengers run down from the car. They decide to wait for a better opportunity to get down to town. We have the chains with iron rods and Timur nails timbers to make the wheels stop. We started the march again. Except for trucks like that of Timur the road is impossible at this time. And sometimes URAL has to work to make way in the mud, the snow and the detachments of the mountain. After 2 hours of descent my neck pains to look back, fearing that the car is no longer there but at the bottom of the valley. But miraculously the car is still with us. In a couple of occasions we have to get off the URAL to make our way and move rocks that have fallen during the night. It is too high to pass over and the road is too narrow to dodge. The return to civilization, 130 kms, takes us 12 hours. Timur parked at the station. It’s the only place where we can unload the car. We said goodbye with a very strong hug. I speak with Tiflis to send us another vehicle and a man comes to invite us to dine Xingali in the restaurant of the station:

“This is not a country to walk alone,” he explains.